What is a Livestock Guardian Dog?

Livestock Guardian Dog is not a job classification, like Search & Rescue, where any dog can do it. LGD is a term used for specialized BREEDS of dogs that have been selectively bred for thousands of years to do their job in a specific way. Their traits are BRED in, not trained in. They are a specific group of dog breeds, like hounds and terriers are specific groups of breeds. A Beagle that is trained to herd sheep does not leave the hound group and enter the herding group, he is still a hound, and he has not been born with the instinct to herd, he has been born with the instinct to hunt. You may be able to train him to do certain things, but he only does those things when you tell him to, not because it is natural for him to do them.
Credit: "EDUCATION - What is an LGD?" Facebook Group:  Learning About LGDs
There are certain traits and requirements that enable a dog to affectively protect livestock from large predators. It is the combination of these traits that makes a LGD what it is, and why other breeds of dogs that are not LGD breeds, cannot, by lack of THIS combination of traits, be considered true livestock guardian dogs. This is one of the many reasons we do not recommend non-LGD breeds, even those crossed with a LGD, being used to guard livestock - the influence of the non-LGD breed, however small, dilutes the traits necessary to be able to perform their job with complete effectiveness.
1. SIZE - LGD breeds are large dogs so that they can physically confront large predators like the coyote and wolf. The size scale runs from about 80 pounds to over 150 pounds. Dogs that are smaller would not be able to successfully physically confront any predator coyote size or larger. Dogs that are too big would not have the stamina or agility to successfully physically confront any quick and agile predator, like a coyote or a wolf. Over-sized dogs are not effective, and will have more problems with physical injuries and breakdown.

​2. AGILITY - Some people think that LGDs are lazy as during the day you can often see them sleeping. However, their serene appearance belies the muscular agility hidden under their fur. LGDs have to be agile and strong to be able to avoid injury when physically confronting a predator of equal or greater size. Too large of dogs will not have the agility needed to move quickly. Too small of dogs may have the agility, but do not have the strength necessary to defend themselves against larger predators.

​3. COAT - LGDs, by the very work that they perform, live in an outdoors environment year round. Most LGD breeds are double coated for this reason, so that in the cold months they build up a warm, insulating coat that protects them from cold temperatures and weather, and in the warm months they shed out their undercoat keeping their outer coat to protect them against the rays of the sun and weather. If a dog does not have the proper coat, it will not be able to comfortably withstand living in an outdoor environment during all seasons. Another aspect of LGD coat is how it offers protection from injury during predator confrontations. If the dog has a thin, stiff coat, they would be more prone to injury from teeth and claw. A long fluffy soft coat would also be ineffective in preventing injury.

​4. TEMPERAMENT - Livestock guardian dog breeds were developed to be self-thinkers. During the night while their shepherds were sleeping, the LGD had to be able to make decisions on its own when situations arose instead of relying on direction or guidance from the shepherd. When patrolling an area or when confronting a predator away from the shepherd, the LGD relied on its independent decisions to handle the situation on its own. Most other breeds of dogs were developed to respond to the direction of man. Herding dogs move the herd where the shepherd desires. Hunting dogs find and retrieve the game the hunter asks it to. Personal protection dogs follow the directions of their handler to deal appropriately with situations. NON-LGD breeds naturally look to their owner for direction, LGD breeds do not. If an LGD had to wait for direction from the shepherd instead of making its own decisions, livestock loss will occur. This is one of the aspects of LGDs that make them more unique in the world of dogs.

​5. BEHAVIOR - Livestock guarding is not all about killing every predator. If a LGD chose to physically confront every predator it encounters, it is taking a much greater risk of physical injury to itself. When confronted with a predator, livestock guardian dogs exhibit a behavior that disrupts the predator's hunting pattern. This behavior is ambiguous or contextually inappropriate, like barking, tail-wagging, social greeting, play behavior, and, occasionally, aggression. Many species of predator will stop their hunting sequence if disrupted, which is often enough to avert predation. However, if this behavior does not deter the predator, then LGDs have the follow-through to be able to dispatch the predator physically if needed.

6. NATURE - Being "good" with livestock takes on a whole new meaning with livestock guardian dogs. Just because a dog does not attack or harass your livestock does not mean that it has the nurturing nature of livestock guardian dog breeds. LGDs consider their flock as their pack, and even then more like puppies or members of their pack that needs protection. Their tolerant nature makes them non-reactive to the painful bounce and jump of young kids and lambs at play. It also guides their reactions to the livestock at all times, not just when their owner is present.
​
7. It is the combination of every one of the above traits that is required to be a truly effective livestock guardian dog. If a dog lacks any one of these traits, the dog would not be able to perform its job to the ability required to effectively prevent predation. 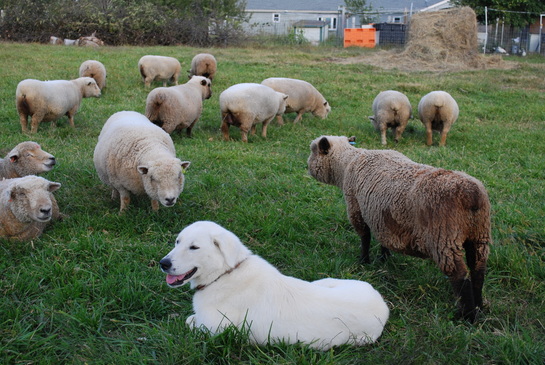 Courtesy of Akbash Dogs International
Dog breeds were developed for specific jobs which affected their size, conformation, behavior and temperament. so that they were best equipped in all aspects to perform the job they were developed for. For example, herding dogs are agile and quick, usually medium sized so that they can quickly interact with the livestock they are herding; certain working dogs are large and muscular, built to pull carts; dogs used to take care of the vermin on farms were small and lightning fast to be able to effectively deal with their prey. Guardian breeds are large so that they can intimidate and ward off predators, they generally have double coats to be able to live comfortably in the outdoors in all weather extremes, they are slow to mature, have a low prey drive and a longer bonding period so that they will develop an affection and trust with their livestock, and their independent nature allows them to make decision without the guidance of man.

Livestock guardian dogs do not react to stimulus, such as a predator, as other canine breeds do. Predators are bewildered and disorientated when confronted by a large dog who reacts to them in a variety of ways from aggression to play behavior and social greeting cues. The LGD's behavior confuses the predator and disrupts its prey drive.

Livestock guardian breeds are by nature very independent - combined with their size and guarding instincts, they are not the best pets for inexperienced people. Many dogs of the LGD breeds end up in rescue because of this.
Traditional or multi-purpose farm dog breeds can also confuse the potential LGD owner. Similar appearing dogs like the Leonberger, Newfoundland, St Bernard, Bernese Mountain Dogs, Mastiffs, etc., often look like some LGD breeds. Dogs such as cur dogs, German Shepherds, Rottweilers, and some other breeds were often found on farms as guard and watchdogs or catch dogs for cattle. But none of these breeds combine all the required traits of a working LGD.

The prey or chase drives in many traditional farm breeds is just too high to make them reliable guardians. Some breeds are excellent watchdogs but lack the nurturing instincts a LGD exhibits towards its charges. Some breeds lack the size or the coat to live outside in difficult weather. Still others do not possess the size, agility, independence, or sense of responsibility to take on serious predators. Many breeds make great all round farm dogs, but they should not be trusted or expected to live reliably with stock 24 hours a day. Crosses between these traditional farm dog breeds and LGD breeds can make fine general-purpose farm dogs, but they should not be expected to serve as working LGDs, as they will inherit some behaviors and physical traits from their non-LGD parent.
One aspect of canine evolution that can be manipulated through selection is neotony – the retention of juvenile traits in an adult dog. These traits include behaviors such as attention seeking, begging for food, submissiveness, waiting for the adult to return, the delay of a fear response to strangers, barking, and playing. The delayed fear response is especially important because it allows puppies more time to form social bonds to humans or other animals, such as sheep or goats. The delayed fear response ends much sooner in wild canines than in dogs, where this critical period has been extended to 12 weeks or more. LGD breeds, in particular, have a very long period of delayed fear response.

Neotony explains the very basic nature of livestock guard dogs, even in their physical appearance. Most LGDs look like big, over-grown puppies even in adulthood. And these big puppies with their curvy tails and floppy ears don’t look very much like wolves or coyotes, and so our sheep have come to accept these “not-wolves” among them.

The livestock guard dogs breeds have been selected for centuries for a very low or non-existent prey drive, a longer period of social bonding than many other breeds, and a physical appearance that suggests “friend.” They have also been selected for attentiveness, trustworthiness, and protection of their stock. When a good LGD is aggressive with outsiders or predators, it is not hunting for prey but protecting its pack mates. They possess instinctual responses to first warn off threats rather than immediately attacking.
Credit: Jan Dohner: "How Livestock Guard Dogs Work: the Question of Genetic Behaviors", Mother Earth News